The Village
Coldharbour is home to a large Iron Age  hill fort, Anstiebury Camp to the north of the village.  Built in the second and first centuries BC, it is a scheduled monument covering some 5 hectares (12 acres). 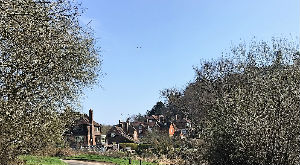 Situated on the road linking London with Arundel, Coldharbour was probably a small hamlet for several centuries until the nineteenth century when it grew as several local estates were developed, with two to the east of the village, Kitlands owned by the Heath family and Broome Hall owned in the mid part of the century by John Labouchere and later by the Hargreaves Browns (and then the Pigott Browns) playing a particularly important role. To the west of the village is Coldharbour Common and the Duke's Warren, which were both part of the Dukes of Norfolk lands.  To the south west was Leith Hill Place which became the home of the Wedgwood family and later the Vaughan Williams.  To the north was the Barclay estate, including Redlands Woods, run from Bury Hill in Westcott.

The beauty of the village and its surrounding area including Leith Hill Tower, described as 'Little Switzerland', attracted many tourists who were able to visit it once the Dorking to Horsham railway was opened in 1867, walking up from Holmwood station, or travelling by horsedrawn cart and carriage from Dorking station.

Today, the estates have ceased to be major employers and old estate properties in the village have become owner occupied as the former tenants died or moved away. 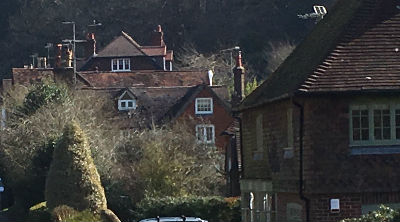 As most of the village is within the Coldharbour Conservation Area and it is all within the Surrey Hills Area of Outstanding Natural Beauty as well as the Metropolitan Green Belt, there has been very limited development over recent decades - such as there has been has been limited to house extensions.  Listed buildings in Coldharbour include the K2 telephone box in the village centre, the War Memorial, Christ Church, Mosses Wood and Woodsmoke Cottages in Abinger Road and Highland Cottage in Broomehall Road as well as Nos 1-5 Broome Hall (the old Hall is now divided into a number of separate residences) and the Broome Hall Clock House and Hunting Lodge.

A century ago the village had a wide range of traders meeting most of the needs of local residents, but as people became more mobile, they gradually closed with the last shop closing in the 1980s.  Only the Plough Inn remained. In 2015 it was bought by a Leith Hill resident, extended and modernised.  the works included the provision of a new shop, the Shop at the Plough which was opened in 2016.  While some villagers work from home and others are commuters to a variety of places, there is little other local employment in and around the village, other than commercial shoots in the Redlands Woods as well on the Broome Hall estate and a livery stable where Merrick Francis, son  of champion jockey and crime writer Dick Francis, once had a racing stable.

Leith Hill
Coldharbour Common is Immediately to the west of Christ Church, just across Abinger Road, as well as to the north of the Church extending into the village.  Like the site on which our Church was built, it used to be owned by the Dukes of Norfolk, but it became a part of the Heath family's Kitlands estate before being gifted to the National Trust in 1986 in a settlement with the Inland Revenue. Just across Abinger Road from the churchyard gate is the Memorial Ground, home to the village War Memorial and a childrens' play area.  The Common is marked by many pits, which were dug to provide stone for local roads and tracks. 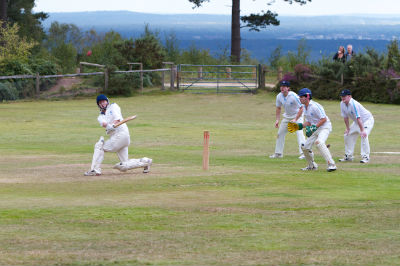 The Common rises steeply from Abinger Road before levelling out, where it is home to the Coldharbour Cricket Club, which used to play on the lower part within the village alongside and across Abinger Road.  With conflicts with growing traffic flows, the pitch was moved in 1950 to its current position, making it the highest ground in the south of England, under a 50 year lease from the Kitlands Estate.  That lease has been extended by the National Trust for a further 50 years. From the pitch there is wonderful distant view to the east, across into Kent and beyond. The leased land is also home to the Coldharbour Pavilion, owned by the Coldharbour Sports and Social Club.

Although until well into the 20th century the Common was kept open by grazing stock, it had become extensively wooded.  However, over recent years, the National Trust, supported by funding from Natural England, has been clearing and thinning some of the woodland to restore the old heathlands, including the blueberries (locally known as whortleberries) for which  the Common was once famous.

To the west of Coldharbour Common lies the Dukes Warren which was given to the National Trust in 1930 by Cuthbert Eden Heath, who is commemorated in one of the Church's stained glass windows. It marked along much of its limits by historic boundary banks which had become topped with beech tress. Sadly, in the interest of preserving the boundary banks, the National Trust has had to fell these trees along some sections. A 19th century spruce plantation which was cleared to meet the needs of the First World War, the Dukes Warren had since become reforested largely by natural regeneration, although a part had been reforested with a larch plantation. Over recent years, the Trust has cleared much of the tree growth, including the larches, to re-establish heathland. 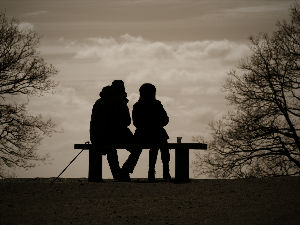 Coldharbour Common and the Dukes Warren are crossed by a number of bridleways as well as a network of footpaths. There is also a dedicated mountain biking track, Summer Lightening.

The western boundary of the Dukes Warren is the Tillingbourne which runs north from just below Leith Hill Tower. The land to the west of the Tillngbourne is part of the Wotton Estate, owned by the Evelyn family, whose ancestors include the 17th century diarist John Evelyn, but made available for public use under an agreement with Surrey County Council, and now managed by the Surrey Wildlife Trust. 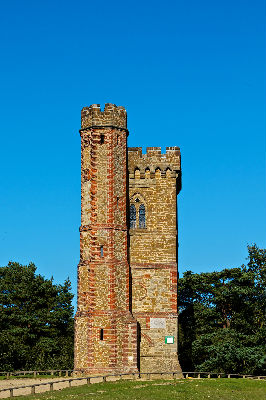 Surrounded by Wotton Estate land stands Leith Hill Tower, atop south east England's highest hill. Owned  by the National Trust since 1923, the Tower was built on what was then Wotton Estate land in 1765 by Richard Hull, who lived at Leith Hill Place. The Tower was heightened  in 1788 to bring its top to 1,029 ft, and a stair turret and battlements were added in 1864.  In 1923, the Tower and five acres of surrounding land were given to the National Trust by  W J MacAndrew, who lived in Reigate.  There is a  display of the history of the tower on the first floor and views from the top over the south east, with the sea sometimes visible through Shoreham Gap to the south and of the Shard and Wembley Stadium arch to the north. 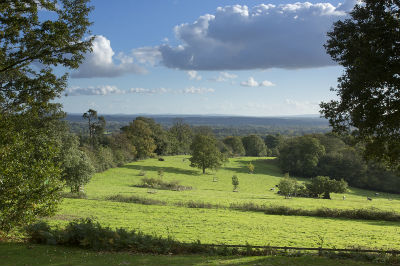 The National Trust’s property in and around the Hill was increased substantially in 1944 when Ralph Vaughan Williams donated Leith Hill Place and its 400 acre estate on the southern slopes of the Hill. A key part of this donation included the Rhododendron Woods, which had been established by Caroline Wedgwood in the late 19th century.

The Trust's holdings were increased further in 1945 when Lady Ivy Pigott Brown donated Mosses Wood - known locally as Frank's Wood after the woodsman who cared for it - in memory of her son Sir John Hargreaves Pigott-Brown who was one of three villagers killed in the Second World War.  There is a memorial plaque to Sir John on a fine gateway in Broome Hall Road opposite Gordon's Lodge, named in memory of his father (Sir Gordon Hargreaves Brown) who was killed in the First World War. They are both commemorated in Christ Church. 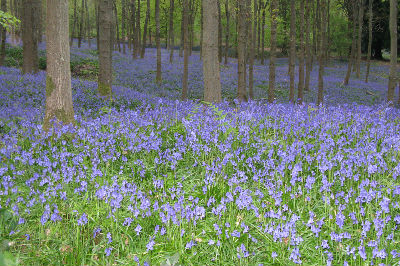 The deciduous woods on the lower southern slopes of the Hill, including Mosses Wood, are home to large areas of bluebells, bringing great pleasure to those of us who live here as well as to visitors to the Hill.

With the exception of Leith Hill Tower and its immediately surrounding land, there is a symmetry between the donations to the National Trust of it's Leith Hill lands and the funding of W D Caroe's work on the interior of Christ Church - the Hargreaves Browns and their successors the Pigott Browns of Broome Hall. the Heaths of Kitlands and Anstie Grange and the Vaughan Williams of Leith Hill Place were responsible for both.

To the north of the Coldharbour Common and the Dukes Warren there is more Wotton Estate land, which includes a waterfall created in the 18th century when Theodore Jacobsen, a Dutch  merchant who lived in nearby in a house long demolished, diverted a part of the Tillingbourne into a two mile long leat (or canal) built along the valley side.  He also created a sequence of pools in the valley, one with a fountain.

To the north and east of the Common are the Forestry Commission's Redlands Woods, managed under a very long lease from the Barclay Estate.

Between them, the National Trust,  Surrey Wildlife Trust (Wotton Estate) and Forestry Commission lands provide a very extensive area of heath and woodland to which the public has access. Coldharbour Common and the Dukes Warren are designated Sites of Special Scientific Interest (SSSIs), and the whole area is within the Surrey Hills Area of Outstanding Natural Beauty (AONB) 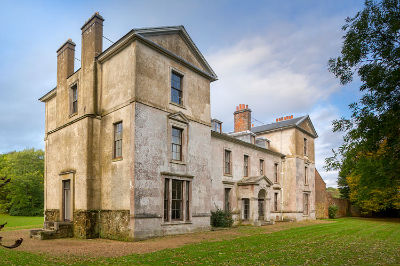 By the time Christ Church was built,  Josiah Wedgwood III of the pottery family had just bought Leith Hill Place. There had been a house on the site since the 16th century, at least, which was bought and altered by Colonel John Folliott who gave its exterior a Palladian Style.  He sold it in 1754 to Richard Hull, who built and was buried in Leith Hill Tower. Following Hull's death in 1772, there was a series of owners before Josiah Wedgvwood III, who had retired from the pottery, bought it in 1847 and moved to Surrey with his wife and three daughters.  His wife was Caroline Darwin, sister to the naturalist and evolutionist Charles Darwin, who involved his three nieces, Sophy, Margaret and Lucy, in his work with earthworms.

Hervey was one of the three local philanthropists who funded W D Caroe's  extensive work on the interior of Christ Church in1904, including the installation of a new organ, which Ralph played when young and which was restored in 1932 with a legacy from their sister Margaret.

Ralph inherited Leith Hill Place on the death of Hervey in 1944 and chose to donate it to the National Trust.  However, the Wedgwoods - first Sir Ralph Wedgwood, then his son John - continued to live in the house, as tenants, until 1972 when it became a boarding house for a nearby school.  Having suffered neglect, it was brought back into occupation by the National Trust in 2008, who  reopened it to the public in 2013, with Wedgwood and Ralph Vaughan Williams displays as well as other special exhibitions, talks and workshops, while they work to secure its future.