As a Church closely associated with the Vaughan Williams family, music has long been at the heart of our life 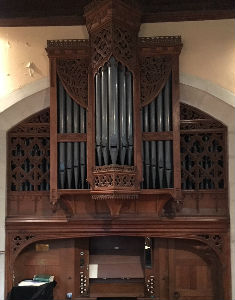 Our organ was built by Frederick Rothwell in 1904 and encased in oak as part of W D Caroe's work on the Church.  The organ itself was funded by Sir Alexander Hargreaves Brown, but Hervey Vaughan Williams, brother of Ralph,  was one of the other contributors to the costs of Caroe's work. Although it was a new organ,  Rothwell made use of a few pipes from the old organ.

The organ has tracker action to the manuals and a drawstop console.  Rothwells made some modifications in 1912, and further work was undertaken in 1932, paid for by a legacy from Margaret Vaughan Williams,  sister of Hervey and Ralph.  Ralph, who spent his childhood at Leith Hill Place, is known to have played the Rothwell organ.

The organ continued in use without further modification until 1981, when Michael Mason electrified the pedal action, fitted a new radiating concave pedalboard, removed the Pedal Bass Flute, which was affected by damp, and installed 12 pipes to extend the Bourdon to a Bass Flute.

Because of mould in the Bourdon chest, in 1994 B C Shepherd & Sons overhauled the pneumatics of the chest, then in 2013 undertook a complete clean and overhaul, replacing many parts  They made and fitted a new wooden trunk to replace one badly infected with woodworm, made a new ladder and fitted new lighting.  As the pneumatic chest for the bottom five Great Open Diapason pipes had not worked for several years, they replaced it with a new electric chest; they also replaced the Pedal Bass Flute top octave chest with a new one, replaced the treble pipes with more suitable second-hand ones and the magnets on the main Bourdon chest and they installed new solid state switching in place of the old electro-mechanical system.

Returning to Christ Church in 2014, Shepherds replaced the pedal board with a new concave straight one, modified the pedal panels, went through the speech and regulation and opened up the Diapason choruses and Oboe slightly, as the tone had been rather dull.

The structure of the organ today is:

We are grateful to B C Shepherd & Sons for this information.  Shepherds have been responsible for maintaining and revising our organ over recent years.

Our Organist
Our organist is David Hansell. With his church and musical roots in Methodism David enjoys hymns and enthusiastic hymn singing.  When studying at Durham University he sang in the cathedral choir and was assistant organist at St Oswald’s church, which had a thriving choir. A career in teaching together with family life brought a move to conducting secular choirs, including the Esher based Ripieno Choir, with which he led a concert in St James.  Following his retirement from teaching and his work with choirs, David returned to playing the organ, sometimes standing in for Ed Sutton (his predecessor) at Christ Church and St James, as well as learning the double bass and enjoying cross-country cycling. When Ed moved to Essex, David succeeded him as our (and St James’) organist and choirmaster in September 2021.

Our Choir
David Hansell is also our choirmaster, while Alan Hustings manages the choir.

The Village Band
Thanks to the hard work of Debby Chapman, we have a fine Village Band which plays at some Church events, as well using Christ Church for its practices.